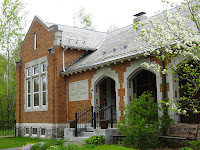 This post describes everything I enjoy doing with my genealogy research and it combines several of my other interests. Among them are two library visits, getting help from two librarians, a surname I knew, a very interesting will to transcribe, two honor rolls to transcribe, solved transcription problems, a fun search for the burial place, I was able to take all the photos I wanted. Based on all my information, I was able to place Aaron in my tree, thanks to great records in NH, MA and CT. And if all this wasn't enough, I discovered that Aaron and his wife married in my city of Lowell, Massachusetts, about 18 miles away from his New Hampshire home. I'll never know why they came here because only their names were on the register, none of the regular bits of information were listed. My story begins when I passed by a library in the dead of winter.

Who was this Aaron Cutler who had a Library named after him? Soon I was searching online for information, because I was positive he and I were related, but I didn't find very much. I decided to wait until spring to go back to the library and speak with the librarian in Litchfield, New Hampshire. Neither she nor the town historian, whom I spoke with on the phone,  knew where he was buried. Recently, I discovered his death certificate online and it stated he died in Hudson, NH and was buried in Londonderry, NH, the town where he was born. His wife was buried with her former husband. Londonderry is next to Litchfield and when blogger friend, Heather Wilkinson Rojo mentioned to me that the library had cemetery books showing where the plots were and some had photos, I called Leach Library immediately. Yes, Aaron was buried there, as were some family members and these had photos! I was at the library within two hours after that phone call.

First, a nice photograph of Aaron Cutler hug prominently on a wall in the Library

Second, two Honor Roll plaques located in the porch of the library, both transcribed.

Third, a small screen shot of the will, showing that I had an easy time transcribing his long will, with 17 items (it lists many people, many who are receiving a share or more of American Woolen stock).

Fourth, a photo of Aaron's resting spot with brother George in the Valley Cemetery in Londonderry.

Aaron is my 4th cousin, 4 times removed. Normally, I don't spend much time researching distant family members. However, in this case, I wondered why this Cutler was in New Hampshire, since all mine were in Cambridge Farms (Lexington), MA, then in Killingly, Connecticut and my most recent, Manasseh Cutler was in Hamilton, MA. When I discovered Aaron's father was born in Killingly, I knew I had a family member.

A small tip. if you are having difficulty in getting all your information to make sense, you might be doing what I did. My problem was with the transcribers, some had Cutler spelled at Cutter, and several had Lemuel as Samuel (his father). But, I pretty much blame myself because I tend to use the exact search on Ancestry. Don't use the exact search, but select Exact and; similar for first and last names. For birth date, use +/- two years. 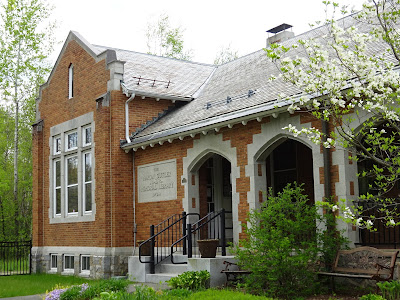 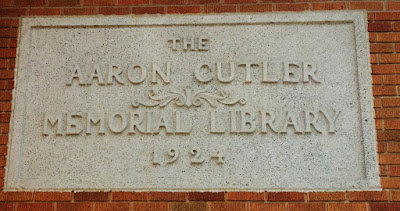 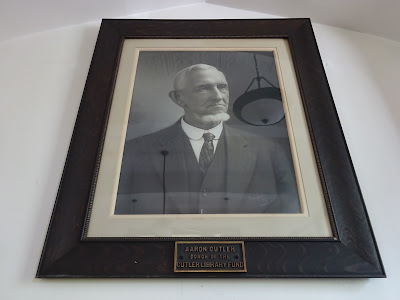 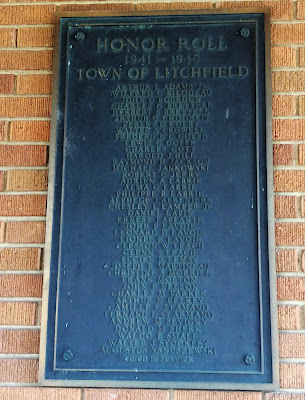 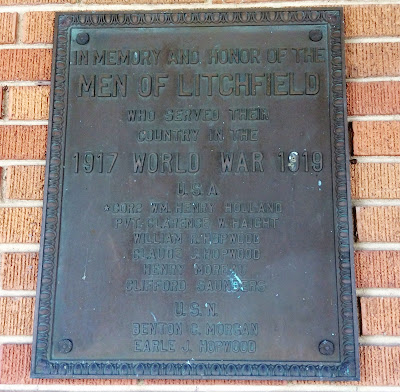 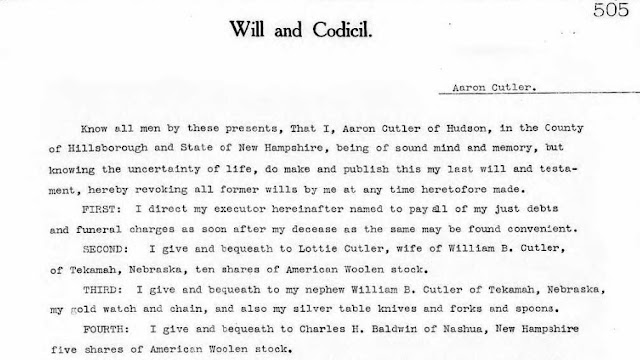 Will and Codicil of Aaron Cutler located on Ancestry.com.
505

Will and Codicil.
Aaron Cutler

Know all men by these presents, That I, Aaron Cutler of Hudson, in the County of Hillsborough and State of New Hampshire, being of sound mind and memory, but knowing the uncertainty of life, do make and public this my last will and testament, hereby revoking all former wills by me at any time heretofore made.

FIRST:  I direct my executor hereinafter named to pay all of my just debts and funeral charges as soon after my decease as the same may be found convenient.

SECOND:  I give and bequeath to Lottie Cutler, wife of William B. Cutler, of Tekamah, Nebraska, ten shares of American Woolen stock.

THIRD:  I give and bequeath to my nephew William B. Cutler of Tekamah, Nebraska, my gold watch and chain, and also my silver table knives and forks and spoons.

FOURTH:  I give and bequeath to Charles H. Baldwin of Nashua, New Hampshire five shares of American Woolen stock.

FIFTH:  I give and bequeath to the Baptist Church of Hudson, New Hampshire, its successors and assigns, one share of American Woolen stock, the income from the same to be used for the following purpose, to wit;- for prizes to be awarded children attending the Sabbath School, between the ages of five and fifteen years, the preference to be given to those showing the most proficiency in recitation and in general deportment.

SIXTH:  I give and bequeath to Frank A. Lovejoy of Hollis, New Hampshire, five shares of American Woolen stock.

SEVENTH:  I give and bequeath to Grace T. Pierce of Scranton, Pa., ten shares of American Woolen stock.

EIGHTH:  I give and bequeath to William W. Baker of Hudson, New Hampshire, one share of American Woolen stock.

NINTH:  I give and bequeath to Maud S. Andrews of Hudson, New Hampshire, one share of American Woolen stock.

TENTH:  I give and bequeath to Lillian S. Winn, now in the employ of Proctor bros. and Co., in said Nashua, one share of American Woolen stock.

ELEVENTH:  I give and bequeath to Jessie Buffum, formerly wife of Leo Buffum, of said Nashua, who is now keeping house for me in said Hudson, five shares of Pressed Steel Car Stock, provided and on the condition that she shall continue to remain with me as my housekeeper as aforesaid, until my decease. But if she should neglect and refuse to so remain with me then this gift if to be null and void.

TWELFTH:  I give and bequeath to Fred E. Todd of Boston, in the Commonwealth of Massachusetts, three shares of American Woolen Stock.

THIRTEENTH:  I give and bequeath to Millie Cutler of Culdesac, in the State of Idaho, eleven shares of Pennsylvania Railroad Stock.

FOURTEENTH:  I give, bequeath and devise to the town of Litchfield, in the State of New Hampshire, all the rest, residue and remainder of my estate, to be
506
same personal, real or mixed, wherever located and wherever found, unto the said town, its successors and assigns, for the purpose of the erection, furnishing and maintenance of a Public Library, upon the express condition that the citizens of said town give land upon which to erect the same. Said land to be located within one-quarter of a mile of the town hall. Said Library to be of brick and slate. And to be known as “The Aaron Cutler Memorial Library.”

FIFTEENTH:  Should said town of Litchfield decline to accept the gift of said rest, residue and remainder of my estate as herein set forth, then the same is to be distributed pro rate among the other beneficiaries herein named.

SEVENTEENTH:  I nominate and appoint Charles G. Pillsbury of Londonderry, New Hampshire, sole executor of this will.

In witness whereof I have hereunto set my hand and seal this seventeenth day of December 1912.
Aaron Cutler.   (Seal.)
Signed, sealed and declared to be his last will and testament by said Aaron Cutler in our presence, who in his presence and in presence of each other and at his request have hereunto subscribed our names as witnesses.

WHEREAS I have heretofore made my last will and testament, bearing date of September 17, 1912, I now make and declare this a codicil to said will and hereby revoke the ninth paragraph of said will, in which I bequeath One share of American Woolen Stock to Maud S. Andrews, declaring said paragraph void.
IN WITNESS WHEREOF I have hereunto set my hand and seal this 25th day of January, 1917.,
Aaron Cutler,   (Seal.)

Signed, sealed and declared to be a codicil to his last will and testament by the said Aaron Cutler, in our presence who in his presence and in the presence of each other and at his request, have hereunto subscribed our names as witnesses.

I needed help in locating the cemetery stone, so I turned to the reference librarian at the Londonderry Leach Library. I was in luck, as an Eagle Scout Troop had documented all the stones, took photos and did detailed maps of the cemetery. The maps are below the photos. 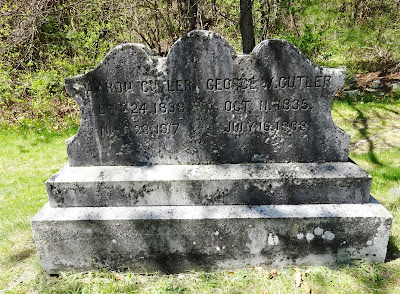 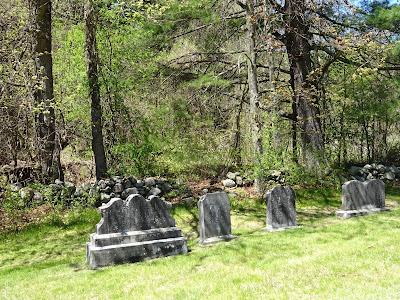 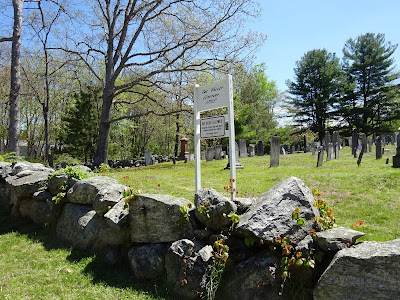