In a few weeks, some genealogists will be preparing for their trip to the RootsTech conference in Salt Lake City, Utah. I can reminisce about a similar conference held in Boston nine years ago. It was the 10th Annual Conference for GENealogy and TECHnology. Combining genealogy or family history with technology is not new, especially since the first conference was in 1993 (of which I don't remember). Recently, I was going through some old material to toss and came across this information.


Yes, the conference was held in Boston in January. But it was among the warmest two winter days, and no snow around. I remember it quite well, because I walked back to the New England Historic Genealogical Library in flats, not boots! The list of speakers is below, as well as a listing of some lectures. A few are quite similar in nature to the ones offered in February 2011 and you will recognize many of the speaker's names as well. 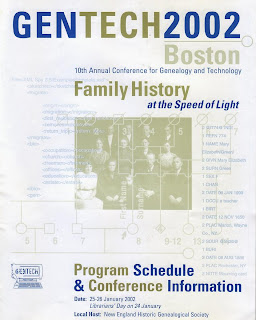 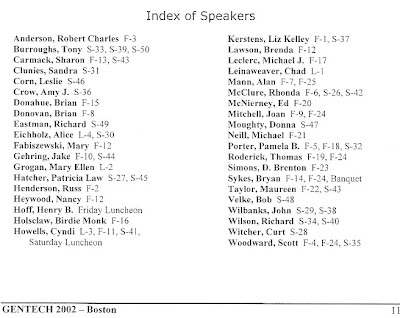 In 2002 there were no bloggers, no lectures about Google, Social Networking, Apps, Flip-Pals or any other recent products. Among the 2002 offered lectures were:


Using FamilySearach.org
Digital Cameras
How to Cite Your Internet Sources
Organizing and Time Management
Evaluating Web Resources
Credible Clues from the Incredible Internet
How to Create Your Own Genealogy CD Disks
Power Tools: The Power is in You, Not the Tool
Using Palm Pilot Computers
Mysteries of the Soundex
Labels: Conference, Location: Massachusetts
Email ThisBlogThis!Share to TwitterShare to FacebookShare to Pinterest