My Facts and Fiction In New York City 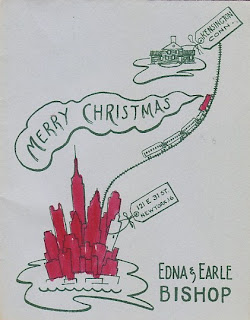 Did I really do that, did I dream it, or did I make it up? These were the questions I asked myself when I decided to write about one of my vacations as a child, and probably my only vacation. The other weeks away were always to Girl Scout overnight camps, and I didn't think of them as vacations.

My grandfather lived in Connecticut, but commuted to his apartment in New York City, to do his architectural work. He had recently re-married in 1953, and they asked me to join them in the city a year or so later. I had been to the city the previous year with my parents, to visit my uncle who was attending medical school at Columbia. Perhaps I mentioned how I liked the city, and based on that they decided to invite me. Or maybe they wanted me to get to know my new step-grandmother.

Piecing my trip together was like doing a puzzle. I knew what I saw and where we went, I just don't know the month or for how long, and I don't know if we saw anything else. Unfortunately, the Christmas card my grandfather made didn't have a date, but at least I knew where I spent the vacation, it was at 121 E. 31 Street, New York.

The address was in the Murray Hill section of the city. Construction was begun in 1930 and completed the following year. There are 12 floors, but I don't know what floor they were on. Their apartment was small, and there were lots of pigeons on the window sill.

The building was four blocks from Empire State Building (thanks to google maps) and a good hike to the United Nations, both places we walked to and toured. I remember the heat one day and seeing the sunset walking back to the apartment through a narrow street. I don't remember taking the subway or a cab, but we probably did at least a few times.

The biggest clue as to the time frame was the movie and show we saw at the Radio City Music Hall, it was, "The Seven Little Foys" with Bob Hope and James Cagney, and since it was released in 1955, I know it was summer, because it was so hot!

Things I had never seen before, but was introduced to were: the Murphy bed, the auto-mat (think we went more than once), and seeing one of the largest F.W.Woolworth stores in the United States (I remember being told that).

Chinatown has always been painted in my memory because it was so beautiful at night. They bought me a lovely black silk fan with painted flowers and birds, and I had it for many years, until it fell apart. I've been back to Chinatown several times, but never during the evening, so it is always the first visit that I remember the most.

Every tourist goes to The Statue of Liberty and I was no exception. I've no real memory of it, just that we went. Or is this fiction? Did I have a nice time, I haven't a clue, so I'll say "yes," it was my first major trip away from my parents, but maybe I was miserable!

Summer vacations are ending, and I thought I'd write a little something about myself. All the activities and memories didn't come automatically as I begin writing this. I worked on it for several days, looked at a NYC map, and forced my memory to remember!
Labels: Architect, Location: New York, Surname: Bishop
Email ThisBlogThis!Share to TwitterShare to FacebookShare to Pinterest