One Will Equal Two and The Great Migration -- Follow Friday

Thomas Scott, who migrated 1634 from England and settled in Massachusetts, gave me a lot of problems. I used several references and some of the data didn't mesh. One source had Thomas as having four children, another had him having seven. His birth was off by three years, and the death by 10 years. The Scott family went into my tree, and online on RootsWeb, and I knew it was wrong. I was Just waiting for somebody to correct me. Finally, the best of the best books was published by Robert C. Anderson, The Great Migration: Immigrants to New England, 1634-1635, Vol. 6, R-S in 2006. I just recently got around to looking at it, because the last of the series, Vol. 7, was released a few months ago, and I went through both books. (See below for more information about the books.)


Imagine, there two Thomas Scotts, both coming to America in 1634, both having children named: Elizabeth, Mary, Sarah and Thomas! And they both lived for a time in Cambridge, MA. A merge and corrections were made, and just as quickly I uploaded it into my RootsWeb, and nobody ever knew of my error! 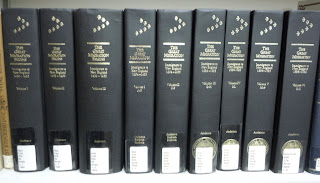 What can you do, if you can't purchase a volume? There are two options, the first is to go to www.worldcat.org (well-known library catalogue) and you should see that 320 libraries own a copy of the first series (1620-1633). Perhaps a library is near you.

The second option is to use Ancestry.com, if you are a subscriber. The first series is on their site, so in a way, it is free for you, since you already subscribe.
Labels: Books, Follow Friday, Reference Book, Surname: Scott, WorldCat
Email ThisBlogThis!Share to TwitterShare to FacebookShare to Pinterest