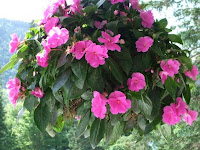 Close to 12 years ago, our new local genealogy club had their first annual pot-luck dinner at a sports club.  At least 30 people were there, and I only knew a handful of them.  Fortunately, my husband was sitting next to an older lady and they struck up a conversation.  I suppose one thing led to another, and they exchanged names.  Low and behold, her married surname was familiar to my husband because I was working on that surname for my tree.  Gail, the daughter, came over and she was also working on that exact same line!  We had so much to chat about. She was my first found cousin, a 6th one at that. The most exciting thing was, mother and daughter were planning on going to the Eastern Townships in the following summer to find cemetery stones and to do some research.

When they returned from their trip to Sutton, Dunham, and , Gail had duplicate copies of all her photos made for me, and a written copy of the inscriptions.  How could a person get any luckier?

Now, you can probably guess that I also had to make the same trip.  So three months later, my husband and I, using Gail’s local map for that area, retraced part their trip.  From , we went through and into north of , it probably took close to six hours. We spent three nights at a lovely modern bed and breakfast, and managed to understand the inn keepers, who spoke mainly French.  Although this area is mostly English speaking, there are a fair number who speak French.

Years later, my cousin bought a series of books, the vital records for the above named towns, and I was able to borrow them.  It sure helped that I didn’t have to buy them as well.

When I first began blogging, this story was one of the first things I was going to write about, and now many months later, I am finally sharing it. The point of all this is, it is important to communicate with others who share your hobby.  I have learned this twice.  Part 2 will illustrate another example.
Labels: Clubs, Location: Eastern Townships Canada, Location: Quebec Canada, Research Tips
Email ThisBlogThis!Share to TwitterShare to FacebookShare to Pinterest