Sabra Adams, the widow of John Adams, my 3rd great-grandfather, is a mystery to me because I know absolutely nothing about her. Not her last name, her age, where born, or where she went after John died. They married between 11 February 1858 and 31 May, 1860 (John's death). I don't even know if it is she who is listed on the 1860 census of Stafford, Genesee Co., New York, living with the Ruben Ensign family. After her husband's death, there was a financial settlement of her husbands estate.


The Administrator's Account on Financial Settlement of John Adams.


"Know all men by these presents that I Sabra Adams widow of John Adams late of the town of Stafford in the County of Genesee deceased  for a valuable consideration received by me of Carlisle Adams, Liberty Adams, Mary Adams, Delight Benham and Grace Wilcox children and heirs at law and next of him of said John Adams deceased and of Isaac Gillett Administrator of the estate of said John Adams deceased hereby acknowledge receipt in full of my share of the personal estate of said John Adams deceased as well my distribution share of said estate as the estate provided by law to be set apart to the widow and children of deceased or to the widow. And I hereby release all my right title and interest in and to said personal estate and in and to such distributive share to the said Carlisle, , Liberty Adams, Mary Adams, Delight Benham and Grace Wilcox and their assigns.

In witness whereof I have hereunto set my hand and seal this eleventh day of June 1860.

__ On this 18th day of June 1860 before me Moses Jaggart County Judge of the personally appeared Sabra Adams to me known to be the ___."


(Note: The Settlement and Heirs of John Adams was posted on October,  2010.) 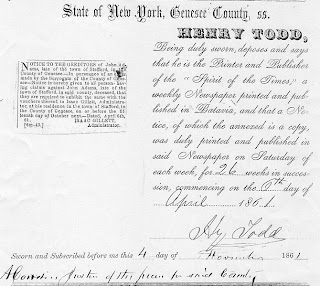 The attached Schedule A provided no clues to Sabra's family. Schedule "A" "Contains a statement of all property in inventory, sold at public or private sale with prices, also loss and gain on each article, also statement of all debts due said estate collected and uncollectable and the manner of disposition of all property inventoried."
Some interesting items listed:
George Adams note (no idea who he is)
Balance on Henry Campbell's note (no idea who he is)
Thomas Downing's Note (no idea who he is)
Two mortgages against son Liberty Adams
The usual house hold items: bureau, table, jar of lard, bed, library, wearing apparel, 4 pictures and frames and a Military suit.
I would love to learn more about the pictures and Military suit, which was inventoried at $1 and sold for .75. According to my information, he was not in the service, but his father was.

Widow, Sabra Adams was paid $595.25. She was one of the six next-of-kin listed. The widow received the money and seems to have vanished. I want to find her.

Amanuensis Monday was begun by John Newmark of the TransylvanianDutch blog. The term means, "a person employed to write what another dictates or to copy what has been written by another." Many bloggers enjoy doing this because it allows them to freely copy something that has been written.
Labels: Amanuensis Monday, Location: New York, Probate, Surname: Adams
Email ThisBlogThis!Share to TwitterShare to FacebookShare to Pinterest