Not On The Railroad Tracks!

My great-grandmother died a terrible death. At age 69 she should have been living the good life, and enjoying her three great-grandchildren. But with her mother's death the year before and her husband's death three years prior, Mira Kilborn Bishop slipped into depression. She had one child, my grandfather, and I can only assume he tried to cheer her up. But, he was married with three children under ten, commuted to New York City from Connecticut, to work as an architect, so I doubt he was around much to help his mother.

I ordered her death certificate March 1991, as I needed this proof for my DAR papers. So I've known a long time about her death. But it wasn't until this past week that I decided to see about getting an obituary, only 19 years later. Then I thought of Random Acts of Genealogical Kindness (RAOGK), something I've never used, but have heard great things about. So, I wrote and requested an obituary on November 11th. On the third day, there it was, an email with a copy attached from a wonderful volunteer. Not quite an obituary, but the write-up about the "accident." Mona Rhone was super, I couldn't believe how fast she was in getting to to me, I didn't even have the chance to be impatient. Thank you Mona, and she already knows she will hear from me again.


Below are the copies of the newspaper article and death certificate. 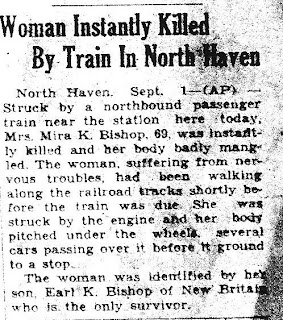 Front and back of death certificate. 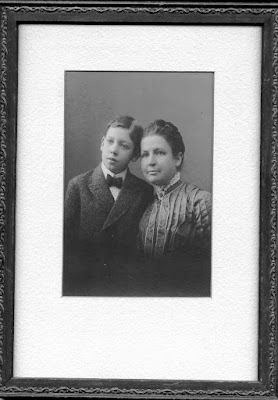