Is He a Black Sheep Too?

Over a week has passed since I wrote “Wintonbury NO Bloomfield, Connecticut,” where I discussed my "Brick Wall." I compiled a list of places to contact and books to read, but it didn’t get me a step closer to finding out who John Adams’ parents were.


The day after my blog posted, I received an email from the historian at the Wintonbury Historical Society, he has seen my blog. I had every intention to contact the Society, but he was quicker. He said, "You apparently took the correct steps in searching in Windsor for folks before 1835 when Wintonbury was a church parish made up of folks from sections of WINdsor, FarmingTON, and SimsBURY. The folks therein successfully petitioned the state legislature at that time (1835) to incorporates as a TOWN and such request was granted. Folks you are seeking before that time are in the town records of the Mother town, mostly Windsor."


I inquired about a book I wanted to see, From Wintonbury to Bloomfield and fortunately he had it, looked up a few names for me, but nothing clicked. Nice of him and it saved me a step and some time.


He also gave me the link to Connecticut State Library holdings. Of the 16 hits for Wintonbury, there was only one I was really interested in, it was a manuscript of 11 documents, [Certificates of transfer from Wintonbury Parish.] Quickly, I dashed of an email to the Reference Librarian for information. Within hours, I had a response from the librarian and I indicated I would prefer the documents scanned in JPEG, rather than PDF or hard copy. To this, she replied, “We just started providing this service so it is a little clunky at this point!” Well, I understood the language, but thought it funny that they were just beginning this service. They don’t use credit cards yet, and she said they would send me an invoice. The images were readable, but not useful to me, so I’m only out $8.50 for 22 copies.


I saw a total of 14 books, either in person at the New England Historic and Genealogical Society’s Library (NEHGS) or online by using the Family History Books (Advance Search) at the www.FamilySearch.org site. My key words were Wintonbury + Adams.


I had mentioned the condition of the Old Wintonbury Cemetery in my earlier post, but I see I was just there at the wrong time. While looking at sites with Wintonbury information, I came across Grave Addition, maintained by Beth, who lives in Ohio and is on the Association For Gravestone Studies (on the Board of Trustees). I went through her Wintonbury site but didn't see anything for Adams or his in-laws, Drake or Smith. What a great web site she has, why not check it out, see her different locations and read about her. She wrote, "The Old Wintonbury Cemetery was established in 1736, and it was in use until 1933. The cemetery is full of old gravestones. There are many old red sandstone monuments with beautiful carvings and interesting epitaphs. Most of the gravestones are in excellent condition. The cemetery is very well maintained." Obviously, I went the day before the grass was to be cut!


What are my next steps? At this point, I'll probably move on to another ancestor, after looking at records in Windsor, as suggested by the historian. My recent research was using online sources, going to a library and the field trip to the town 100 miles from me. Years ago, I did a more detailed search, looking at possible wills and going to the Connecticut State Library to look at the Barbour slips in person.


Note: Four different people, three from different lines and generations have all heard that this John Adams “was a descendant of a 'blacksheep' branch of President John's family." Since he doesn’t want to be found, I believe he was too.
Labels: Brick Wall, Location: Connecticut, Surname: Adams
Email ThisBlogThis!Share to TwitterShare to FacebookShare to Pinterest

A couple once again 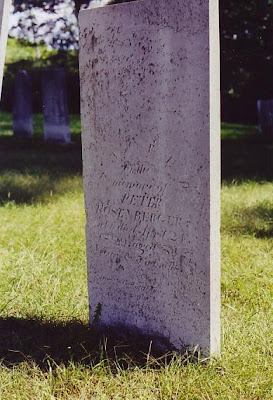 In September 2010, I posted the above tombstone photo of Peter Rosenberger, buried in Krans Cemetery, Missisquoi Co., Quebec, Canada. His wife was mentioned, however I didn't have her photo. When it was taken in 1999 (before digital cameras) I ran out of film. Fortunately, a friend with ties to that area made a recent trip, and I asked if he would take a photo of his wife's stone, as I recall seeing them together. Thank you David Ellis for taking these four photos. 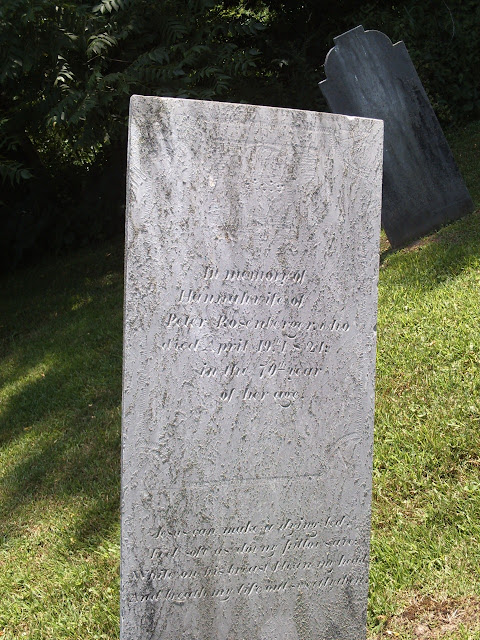 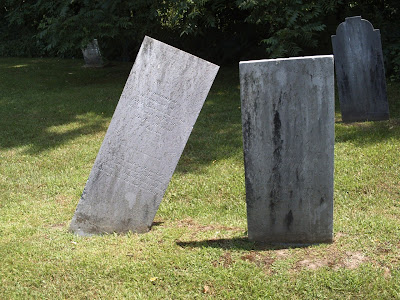 Peter and Hannah finally shown together. 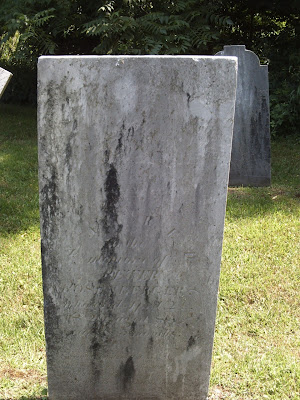 Photos by David Ellis, (above is Peter Rosenberger, below is the cemetery from the street). 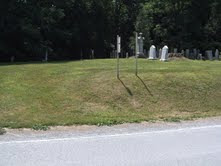