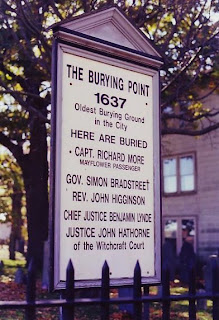 Certain things catch my eye while researching and at that instant I know I must find out more. While looking through a listing of burials at the Salem Street Cemetery in Salem, Massachusetts, I came across death information about Nathaniel Ward, who died at the age of 23. That wasn't all that caught my eye, it was the large paragraph showing the inscription on his headstone. My fourth great-granduncle was the Librarian at Harvard University! A 23-year-old, having that job is quite impressive, so I set out to discover more.

I discovered from a listing of Graduates of Harvard University, Nathaniel received his Bachelor of Arts degree in 1765, he was about 19.

1768.
"Nathaniel Ward, dying 12 October 1768, just a week after his appointment as Librarian of Harvard, was a young man of unusual promise. The papers of the time with one accord deplored his death. The Essex Gazette said: "Few young Gentlemen ever received such early Honors, or distinguished Tributes to superior accomplishments; fewer so well deserved them."
Nathaniel Ward was born at Salem, 29 July 1746, the son of Miles and Hannah (Hathorne) Ward. He took his degree of A.B. in 1765, followed by the degree of A.M. He was particularly fond of mathematics in college, and was offered the chair of mathematics and natural philosophy at King's (now Columbia) College, New York. This offer he declined, as well as a vacant tutorship in Cambridge. The office of Librarian at Harvard accepted and was looking forward with great pleasure to his duties when he was prostrated with a fever which proved fatal. He was to have married Priscilla, youngest daughter of President Holyoke. Among the tributes in the Boston Weekly Xeics-letter is the following: "Of an open and frank disposition, his mind was elevated above everything mean and groveling, and his whole conduct discovered the Benevolence of his Soul."

He is buried in the Charter Street Cemetery  Salem, where the Latin inscription over his grave is still to be seen. The calculations, transits, etc., for the 1769 edition of the "Essex Almanac" were made by Mr. Ward.
Authorities: Essex inst. Hint. Collection*, ii.206, (article by B. F. Browne). Essex Gazette, 18 Oct. 1768."

"Ward, Nathaniel Born July 29, 1746, Died October 12, 1768 age 23 years. The son of Miles and Hannah (Hathorne). The inscription on his headstone reads as follows: "In this grave are the deposited remains of Nathaniel Ward AM. Late librarian of Harvard College, whom penetrating genius, improved by extensive Acquaintance, with liberal arts and sciences rendered superior to most; his native good sense, and literary accomplishments, attracted universal notice, while amiable disposition, and social virtues, especially his singular frankness and dissembled benevolence, gained him esteem and love of all. He was a dutiful son and affectionate brother, a faithful friend and an agreeable companion. Sincere toward God, crowned his other virtues, and promised a life eminencely useful, but blasted hope. In vigor or youth amidst happy prospects, cut off by raging fever. He breath forth his soul October 12 in the year 1768 aged 23." From: Carlson, William Compiler. Charter Street Cemetery Burial Records: Salem, Massachusetts. Salem, MA: Higginson Book Co., 2009. Page 59.
Additional information:
His parents outlived Nathaniel by 24 or more years.

Nathaniel was the great-granduncle of William Frederick Poole, one of the most well-known of all Librarians in America.

Once the weather turns warm, I'll locate Nathaniel's stone, read, compare the inscription to the above, and take photos.