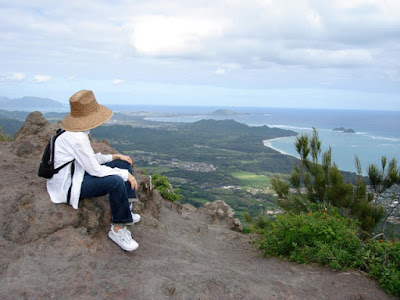 My 6th Lowrey cousin in Hawaii.

We all love receiving messages from distant cousins, but hearing from one who lives in Hawaii was extra  special. She and three generations of her Lowrey ancestors have lived there! In the past, I have written about my Lowrey line, one article was, Follow Reunions --  One of Mine Started in 1875.  My entire Lowrey line remained in Connecticut. All that made for pretty easy research, and sometimes not so interesting either. So, it was a real surprise to hear that we share the same ancestor, an ancestor who came from Ireland and married in Boston, then moved to Connecticut.
Her Lowrey great-grandfather left Massachusetts and traveled to Hawaii in 1879. There is a lot of information on her family on the internet, and one article illustrates why:
"Merchant, Honolulu; born Oct. 18, 1858, at Pittsfield, Berkshire Co., Mass.; son of Frederick Canfield and Alice L. (Moore) Lowrey; descendant of long line of military officers of the War of Revolution, including Col. Samuel Canfield, Captains Daniel Jewett, Abijah Moore and Joseph Higley; educated in public schools of Pittsfield, Mass., and California, and business college; married Cherilla L. Storrs in Honolulu, Jan. 17, 1884; four children: Frederick Dwight, Sherwood Moore, Helen Storrs (deceased), Alan Jewett. Began business career in San Francisco, Cal., and in Honolulu with Lewers and Dickson, in 1879; later with Lewers & Cooke, hardware and lumber merchants; became president of Lewers & Cooke, Ltd., when incorporated Jan. 1, 1901; president of Oahu Sugar Co., Ltd.; president of Waiahole Water Co., Ltd.; vice-president, Honolulu Gas Co., Ltd. Was chairman, Board of Prison Inspectors; member, Board of Health during plague epidemic; sergeant and later captain, Citizens' Guard; ex-president, Queen's Hospital; president, Oahu Cemetery Assn.; president. Hawaiian Board; president, Trustees Central Union Church; trustee and ex-president, Y. M. C. A.; member and ex-president, Social Science Assn.; trustee and ex-president, Cham, of Com. Member Pacific, Commercial and Country Clubs."
During our emails, I discovered that she has New England roots on her mother's side, Boston to be exact. One little tidbit she shared with me was, "If you've ever been to the Plimouth Plantation, the land it sits on was donated to the plantation by my mom's families." Now that impressed me. If you have ever been Plymouth, Massachusetts, you probably went to the Plimouth Plantation. Below is a photo taken ages ago, when my husband and I first went there. It was so faded, I took most of the color out, and made it black and white. 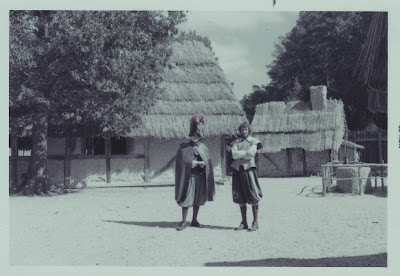