Three Cemetery Databases for One Cemetery and Not One was Complete. What Would You Do? 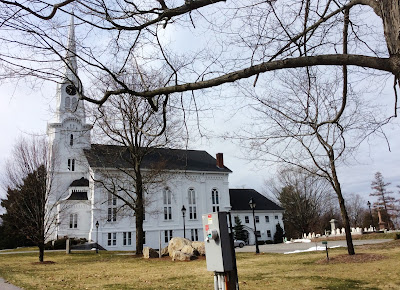 Have you noticed that quite often there are different sets of cemetery records for one cemetery? I found three databases for an Andover, Massachusetts cemetery, so, you simply should not rely on FindAGrave all the time, although that is where I always go first when it comes to trying to find cemetery information with listings and photos. I was looking for the burial of Anne Poole Bartlett, and began first with FindAGrave (and found my cousin's name listed), the second search provided a site with her tombstone photo and listed her birth and death dates, and the third site had quite a bit of information, complete with Lot and Grid numbers, but no photos or map. Which one helped me the most?

Step 1
The first step was to check FindAGrave (FAG), and as you can see there is a listing for Anne Ward Poole Bartlett, who died in 1961. I was surprised there wasn't a photo, but because of her recent death date, I assumed she might have been cremated, but I needed to know for sure.

Step 2
A click on a website for http://www.southchurch.com/ given on the FAG site appeared to be just for the church. So decided to do a google search to see if there was any information on Anne Poole Bartlett. I found http://andover.essexcountyma.net/index.htm a site with a lot of Andover information, but I clicked on Cemeteries and Churches then saw the  *** NEW *** South Parish Cemetery Photo Project (2006) which took me to an alphabet listing which is divided into 9 sections. If you do this, you'll need to go to the appropriate column for your surname. You'll find names of those buried, birth and death dates and photos! However, there wasn't a way to find out where the cemetery they were buried.

Step 3
It wasn't until I went back to the church website and saw at the bottom of the page the word Cemetery which brought me to Search Cemetery Database. (Note: Cemetery is now on the bottom because the entire front page was changed for Easter. After Easter, it will probably be towards the top.) It's easy from here on out, just type in your surname, as I did below for Bartlett, Anne Poole. You'll get the Lot number and Detail. Click on Detail, and you'll get a detailed report ... see my yellow report below on Anne Bartlett. I've never seen anything like this in all the 150 or so different cemetery visits I've made.

I made a quick call to the church and learned that they have maps! The following morning, after printing out my names and writing their Lot numbers with Grid number (very important), I showed up at 9:30. Once you have the Grid, it is easy to find who you are looking for.  Copy of map is below.

To recap, if you believe your individuaol is buried in this cemetery, you'll need to insert the surname, note the Lot number and Grid number (from the Detail information), then use the map. 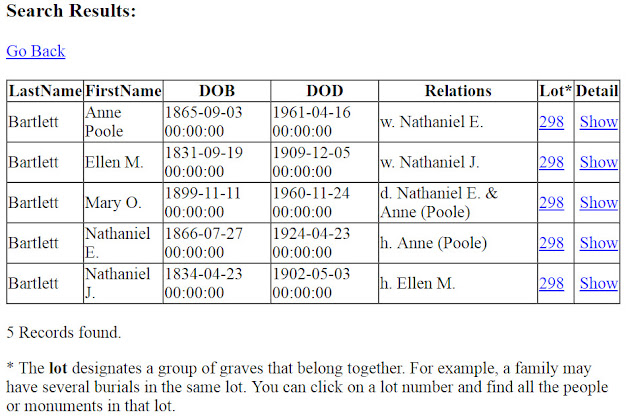 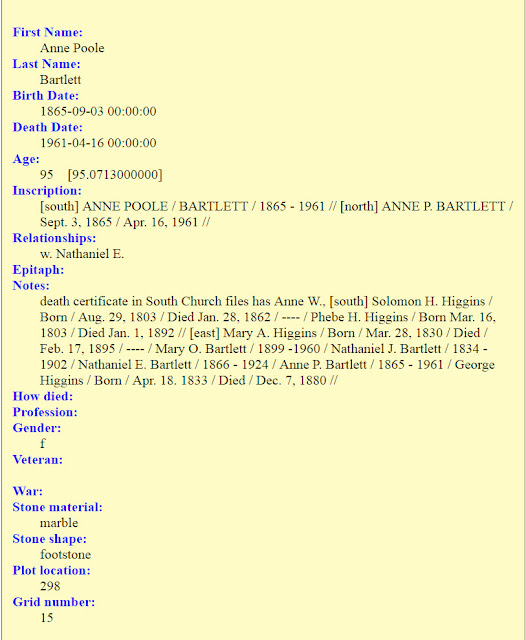 The following Cemetery Statistics was taken, with permission, from the South Parish Burial Grounds page on the Cemetery link. Some information is extremely useful, especially about the for 339 Abbot / Abbott surnames.

"The South Parish Burial Grounds were established with the Parish in 1709.

Three of the four captains of the Andover Militia who marched on Concord and Lexington and later Bunker Hill, are buried here with their families, along with 81 other veterans of the American Revolution.