The below obituary contained a wealth of information for me. Each paragraph had something I didn't know. There was only one thing missing--that being his parent's names. (However, I already had them.) I couldn't trace John Quincy Adams in census records from 1870 to 1910, as there were too many. Then, I decided to use his wife's name, Frances, and there he was, listed as Quincy! From this obituary, I also learned he was of Wyoming, New York, not the state of Wyoming. 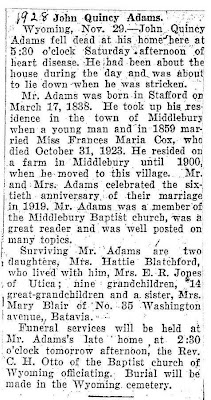 
Wyoming, Nov. 29,--John Quincy Adams fell dead at his home here at 5:30 o'clock Saturday afternoon of heart disease. He had been about the house during the day and was about to lie down when he was stricken.


Mr. Adams was born in Stafford on March 17, 1838. He took up his residence in the town of Middlebury when a young man and in 1859 married Miss Frances Maria Cox, who died October 31, 1923. He resided on a farm in Middlebury until 1900, when he moved to this village. Mr. and Mrs. Adams celebrated the sixtieth anniversary of their marriage in 1919. Mr. Adams was a member of the Middlebury Baptist church, was a great reader and was well posted on many topics.


Funeral services will be held at Mr. Adams's late home, at 2:30 o'clock tomorrow afternoon, the Rev. C. H. Otto of the Baptist church of Wyoming officiating. Burial will be made in the Wyoming cemetery."