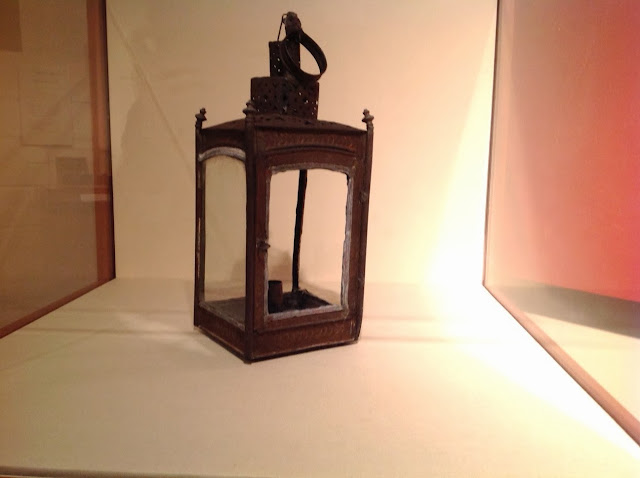 One of my favorite museums is the Concord Museum in Concord, Massachusetts. There is a new exhibit beginning today, called, "The Shot Heard Around the World: April 19, 1775." I took the two photos last fall and planned on posting them today, an anniversary day of April 18, 1775.

From the Concord Museum's web page is the following:
"Late in the evening of April 18, 1775, Paul Revere got word that the British were about to set out on a raid of the Provincial Congress’ military supplies stockpiled in Concord. He ordered fellow Patriots to set two lighted lanterns in the
belfry of Boston’s Christ Church (Old North Church). This prearranged signal was intended for the Patriot leaders across the Charles River in Charlestown and indicated the route of the British march. Since 1853, this lantern has been identified as one of the lanterns hung as a signal in the church belfry. The collector, Cummings Davis (1816-1896) acquired this lantern around 1853 with the history that it was “bought in 1782 by Captain Daniel Brown, of Concord,
from the sexton of Christ Church in Boston, and affirmed by the said sexton at the time to have been one of the two lanterns flashed from the belfry of that church by order of Paul Revere on the evening of April 18, 1775.”
Labels: History, Location: Massachusetts, Museum, Paul Revere, Travel/Tourism
Email ThisBlogThis!Share to TwitterShare to FacebookShare to Pinterest