A Library, A Librarian and Two Cousins 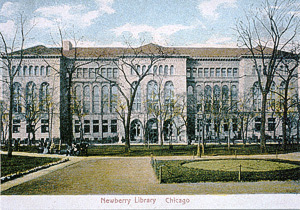 "We have consulted no librarians, not even our own. Librarians are not practical men and have bees in their bonnets," said William W. Greenough, former president of the trustees of the Boston Public Library. I believe many of us will disagree with that statement.


A good nine years ago, I connected with a distant cousin (she in Michigan, I in Massachusetts), discussing our Schrambling / Scramlin ancestry. Last week, in another conversation, we realized we had a connection to the Newberry Library in Chicago. One provided the funds for the new library and one was the first librarian. It is pretty interesting to think that two people can connect through a building and an occupation, not just through genealogy (we are 5th cousins, once removed). My 2nd great-grandfather, William Frederick Poole, was the first librarian at the Newberry Library and her 2nd great-uncle provided the funds to have the library built.


From Wikipedia, "The Newberry's first librarian, William Frederick Poole, was a primary force behind the library's non-circulating research and rare book collections, as well as conceptualizing the facility to house them. The present building, designed by Poole[1] and architect Henry Ives Cobb (1859–1931), opened in 1893.


Recently, cousin Joyce Luscomb provided me with some information on her side, "The Newberry Library was founded in 1887 by a bequest of Chicago land developer and city leader Walter Loomis Newberry (1804-1868). Newberry was an early Chicago resident, arriving in the city in 1833 from Detroit. He quickly became involved in a variety of business ventures, and made his fortune in railroads, real estate, and banking. The young city also counted on Newberry's involvement in other ways: he helped found Chicago's Young Men's Library Association in 1841, served on the city boards of health and education, and was president of the Chicago Historical Society from 1860 until his death.


Newberry's will provided for the establishment of a free public library on the north side of Chicago— but only if his surviving daughters died without issue. (At the time of Newberry's death, Chicago did not have a public library. The Chicago Public Library was founded six years after Newberry died, in 1874.) The daughters, Mary Louisa Newberry and Julia Rose Newberry, both died within 10 years of their father. Newberry's wife, Julia Clapp Newberry, died in 1885. Newberry's wishes for a library were finally honored two years later, when half of his estate ($2.1 million) went towards the founding of the Newberry Library. By this time, the Chicago Public Library was thriving. The Library's first trustees, therefore, decided to devote Newberry's bequest to the establishment of a "library for scholars and people desiring to make careful researches." Over the next few years, the Library's collecting scope was further refined, and the Newberry became dedicated to the humanities."
Labels: Library, Location: Illinois, Newberry Library, Surname: Newberry, Surname: Poole
Email ThisBlogThis!Share to TwitterShare to FacebookShare to Pinterest