Three Generations in My Family Wrote to the Same Cemetery


Several years ago, I requested information from the Oak Hill Cemetery in Battle Creek, Michigan to see if they had any information on quite a few ancestors and family members buried there.

They responded by providing plat cards, a map of the cemetery and enclosingF copies of letters written to them by my father, grandfather and grandmother! The most recent letter was written in 1961 by my father, as shown below. Clearly, my father wasn't into genealogy because he had question marks on four names.

Through the years, I managed to get cemetery photos of my direct ancestors buried there, solved the relationships and now know all their full names. I loved knowing that my grandparents and father had an interest in those buried in the plot.

But, the best part of all this is what my grandfather wrote, "So far as I know, the statement in the letter above is correct since Mrs. Poole had never been able to find any trace of the John A. Adams branch of the family." It is because of this statement that I'm doing this post.

Naturally, I was up to the challenge, since this was my great-granduncle. My ancestor stayed in Michigan whereas his brother moved to Texas. Tracing the family was rather simple, but I never tried to contact family members, although I think I could have because of their business. Then one day, a few months ago.....my third cousin wrote me! She was thrilled that I knew answers to some of her questions, and I was beyond excited to hear from her line and to get answers to some of mine. She mailed me a manuscript, and I've gotten together copies of all my Adams papers to mail to her. Because of my new cousin, I ordered and just received last week, the will and probate of our 3rd great-grandfather who died in 1879 in Wisconsin. It will be a treat to share it with her.

Letter to Oak Hill Cemetery from my father:

In [sic] working up a genealogy for the Adams branch of my family, I have come across records stating that my grandfather and grandmother, also some great grandparents are buried at Oak Hill. I have very little information on them and would appreciate any data you might have on the following;

A letter from my mother, Marjorie Anderson Adams Poole, indicates that the lot number is 797 for the above.

I would greatly appreciate any vital statistics of the above families. To my knowledge, no plats were ever made up for my family as indicated in your letter to my father Clarence F. Poole, Chicago, Ill., dated Feb. 3, 1953. If these plats are available, I would appreciate a copy of them.

Sincerely yours,
John A. Poole

I also received a copy of what my grandfather wrote them in 1953, shortly after my grandmother's death. She had been interested in the family plot as well.

I am executor of the estate of Marjorie A. Poole who passed away a few weeks ago. (There are two more paragraphs about what he is trying to find out.) 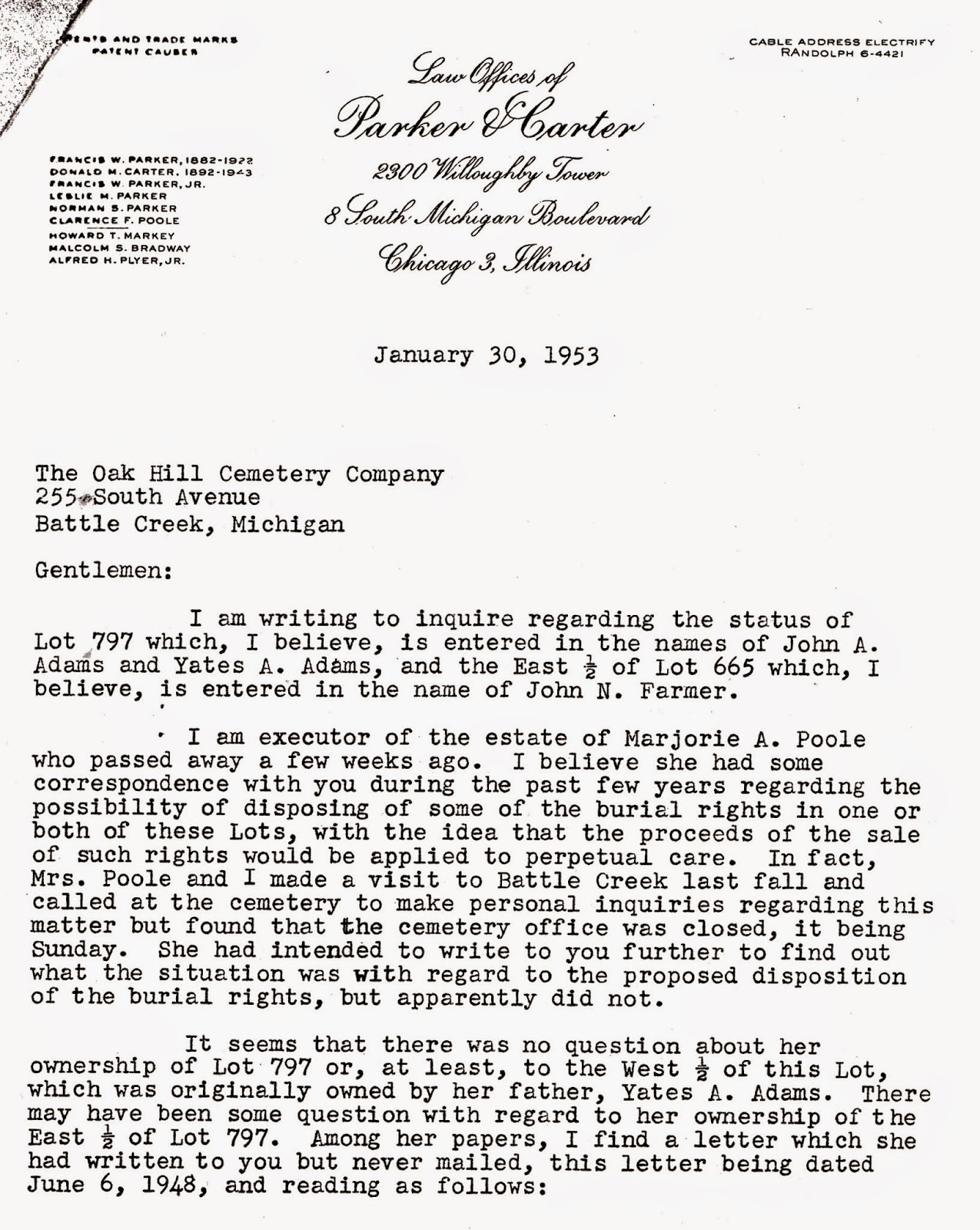 "Among her (my grandmother) papers, I find a letter which was hand written to you but never mailed, this letter being dated June 6, 1948, and reading as follows:

I have made an effort to trace the heirs of John A. Adams wo whom is ascribed the ownership of Lot 797, W 1/2 and have not been able to trace them. They were last in Texas - Beeville - in 1910 or 1912 and there was a Howard Adams and two daughters, but I have heard nothing of them since. I have hoped to go to Battle Creek before this time to settle the matter of perpetual care, etc., but have been ill and unable to do so. However, I expect to be in Battle Creek in the near future. Yours Sincerely,  /s/ Marjorie A. Poole' 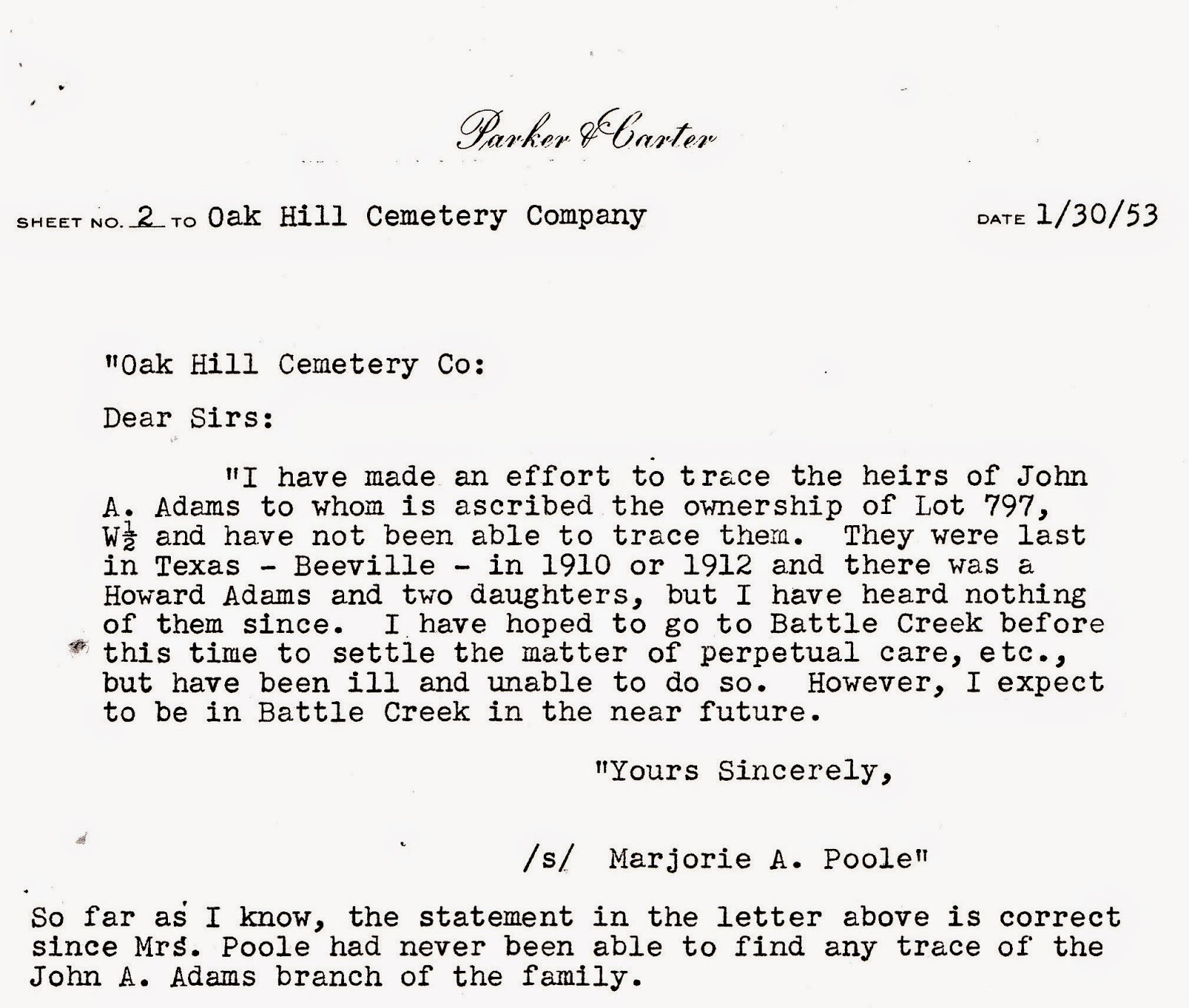 So far as I know, the statement in the letter above is correct since Mrs. Poole had never been able to find any trace of the John A. Adams branch of the family."
Labels: Cemetery, Location: Michigan, Surname: Adams, Surname: Poole
Email ThisBlogThis!Share to TwitterShare to FacebookShare to Pinterest